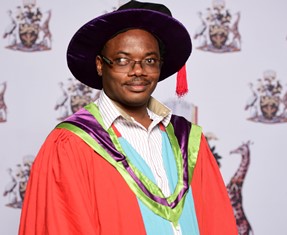 Sokame has currently completed his PhD in Crop Protection from the university of Nairobi, Kenya in partnership with the International Centre of Insect Physiology and Ecology (ICIPE), Nairobi, Kenya. He is a national of Togo and did his previous studies at school of Agriculture University of Lomé, Togo, where he obtained BSc and MSc degrees in Agricultural Engineer, majoring plant production in 2012. His research interests include all aspects of crop production and pest management. He previously worked on Maruca multi-nucleopolyhedrovirus, MaviMNPV and vegetable oils for cowpea pests control at IITA-Benin, 2011-2012. Later on, he moved to the University of Lomé as researcher assistant where he was involved in several projects aimed at crop pests IPM control by a means of insect pheromones, mychorrizal fungals, plant extracts. In 2016, Sokame joined ICIPE to conduct a PhD where he registered in Crop Protection from the University of Nairobi, Kenya in 2017. Therefore, he looked at chemical ecology mechanisms underlying oviposition choice in maize lepidopteran stemborers and the interfering of the invasion of the Fall ArmyWorm. Currently, Sokame is under Data Management, Modelling and Geoinformation Unit at icipe where he is involved in climate model applications in agricutural cropping systems and methodological approach for predicting and mapping the phenological adaptation of tropical cereal crops using multi-environment trials. He has over ten publications in scientific peer-review journals

Lepidopteran stemborers are still among the most important pests that are reported to cause maize yield losses in sub-Saharan Africa. In Kenya, they seriously limit potential maize yield. The recent invasion of the fall armyworm in the maize growing region of the country has further complicated the management of stemborer pests in maize fields. For proper management of maize pests, the knowledge of the behavioural and chemical ecology, eco-environmental factors and interaction among various pests species in the field is essential. Therefore, this study aimed to identify the main reservoir source of maize stemborers and associated parasitoids that give rise to new populations in succeeding cropping season and evaluate the chemical basis of the female moth oviposition site preference. Furthermore, the communal larval interactions among the stemborer species and FAW larvae and the factors such as larval dispersal potential, environment temperature, larval density and duration of the interactions as well as the susceptibility of FAW larvae to the stemborer associated parasitoids were also studied. The study showed that maize residues constituted their carry-over niches during off-season that give rise to new habitat management considerations in IPM strategies. The chemical basis highlighted specific attractant volatiles compounds that generate applications in the development of a multi-species lure targeting female moths. FAW constitutes an additional production constraint of cereal crops that can co-exist with stemborer species along different temperature gradients. In addition, the nonreproductive mortality induced by common stemborer specific parasitoids can be explored further as part of FAW biological control contribution.

Invitation to EfD Kenya Seminar - Water Use in the Kenyan Commercial Sector: Coping with Strategies to deal with Unreliability
END_OF_DOCUMENT_TOKEN_TO_BE_REPLACED