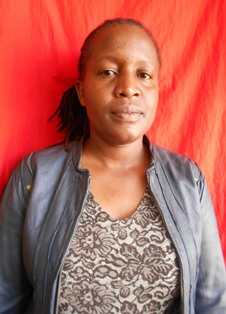 Arnet Nyambura Kuria was born on May 30th 1988 in Embu County.  She attended her O levels at Kigari Secondary School where she attained a K.C.S.E certificate. Later in the year 2008, she attended Paramilitary training at The National Youth Service where she also underwent a Diploma course in general agriculture at Yatta School of Agriculture. After completion of the diploma course in 2012 she worked at KALRO Embu under maize breeding program for one year.

Northern leaf blight (NLB) is a major foliar disease caused by fungus Exserohilum turcicum that leads to limited production of cereals in the Sub-Saharan Africa. The disease lowers production of maize up to 80%, threatening food security in the region. Currently, new technologies have been incorporated where digital imagery tools are used for detecting foliar diseases in the field earlier enough before the severity is high. To curb this major problem of foliar diseases in maize quantitative trait loci (QTL) mapping is recommended and adopted to assist as an effective and efficient tool in breeding to generate resistant host plants. This study was implemented to; i) compare the visual scoring method of phenotyping foliar diseases with the digital imagery methodology ii) Identifying the genomic regions associated with resistance to Northern leaf blight disease through quantitative trait loci mapping. Data was collected where the disease severity was scored using a CIMMYT scoring scale. All data collected was analyzed using Meta-R software. It was concluded from the studies that digital imagery analysis led to more efficient and effective breeding. To identify genomic loci associated with NLB resistance, double haploid (DH) lines from two bi-parental mapping populations were genotyped and marker trait association analysis carried out. Genome-Wide Association Study (GWAS) revealed a major quantitative trait locus (QTL) on chromosome 5 and chromosome 7 that were significantly associated with NLB resistance. This study provides important insights into the genetic architecture underlying resistance to NLB.

Invitation to EfD Kenya Seminar - Water Use in the Kenyan Commercial Sector: Coping with Strategies to deal with Unreliability
END_OF_DOCUMENT_TOKEN_TO_BE_REPLACED