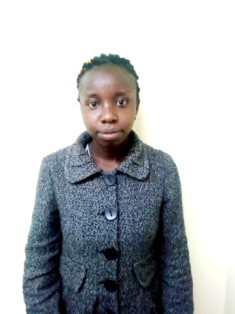 Rachael Wachira is a degree holder of Bachelor of Science in Microbiology and Biotechnology in the University of Nairobi where she attained First Class Honors.  She enrolled for her Master of Science in Plant Pathology in September 2017 at the College of Agriculture and Veterinary Sciences in University of Nairobi and is a beneficiary of Gandhi Smarak Nidhi Scholarship for the academic year 2017/2018 and 2018/2019. Her project work was funded by the McKnight Foundation through KALRO-Kibos. She is an aspiring research scientist in mycology and is currently working as a research assistant in the Efficacy Unit co-ordinated by Professor Eunice Mutitu in the University of Nairobi. Rachael Wachira is thrilled to graduate with a Masters degree on 11th December 2020.

Root rot complex is a major biotic constraint to bean productivity in Western Kenya caused by synergistic associations of different soil borne fungal pathogens. It is aggravated by infestations of bean stem maggot and is severe in acidic soils whose fertility is low. The disease causes poor seedling emergence, low plant establishment and yield losses of up to 70%. Management of root rot by seed dressing with fungicides has a short-lived effect of two to three weeks after sowing while disease tolerant varieties are few. Thus, the study evaluated the effect of biochar, lime, compost and DAP as soil amendments on soil acidity and bean root rot. Field experiments were conducted in farms whose soil pH was less than 5.5 at Nandi South within Kapkerer, Kiptaruswo and Koibem characterized as low, medium and high soil fertility sites respectively. The treatments used were biochar, lime, compost, diammonium phosphate and their combinations and were laid out in a Randomized Complete Block Design. The field experiment was carried out during the short rains of 2018 with a repeat in the long rains of 2019. Biochar, compost, lime and diammonium phosphate were applied at rates of 1t/ha, 2t/ha, 2t/ha and 67kg/ha respectively. Soil samples were analyzed for pH, nutrient content and quantification of root rot pathogens. Bean root rot, stem maggot incidences and plant mortality were assessed at two, four and six weeks after emergence and expressed into percentages while yield and yield components were assessed at physiological maturity. Combined application of biochar, lime, compost and DAP had significantly higher effects than their sole application on soil acidity and bean root rot. Sole application of lime, two-way combination of biochar with lime and three-way combination of biochar with lime and compost, significantly (p≤0.05) soil pH by 0.6 to 0.8 units. Prevalent root rot pathogens isolated from soil were Rhizoctonia solani, Fusarium oxysporum and Fusarium solani. The effect of the amendments 5 on population of root rot pathogens, varied per pathogen. Both an increase and a decrease in population of Rhizoctonia solani was noted among the treatments. All the treatments had significantly (p≤0.05) higher population of F. oxysporum and lower population of F. solani compared to non-amended soils. In both seasons, non-amended plots had significantly higher percentage plant emergence and stand counts than amended plots. This effect was mostly noted in treatments containing DAP. The effect of the treatments on plant mortality varied in season whereby, the treatments had significantly higher plant mortality in the short rains of 2018 and significantly low plant mortality in the long rains of 2019. In both seasons, most of the treatments had significantly reduced incidence of bean root rot by 52% to 77% compared to non-amended soils. This was noted in treatments of lime, biochar +lime, biochar +lime+ DAP and biochar + lime + compost, biochar + compost +lime + DAP, lime + DAP and biochar + DAP. Incidences of bean stem maggot were significantly (P≤0.05) reduced in application of biochar + compost +lime + DAP, biochar + lime and biochar + compost by 52% to 77%. Application of biochar + lime+ compost resulted in a significant increase on biomass by up to 30% while application of biochar + lime+ DAP significantly increased the number of pods per plant and seeds per pod by 63 and 77% respectively. Additionally, application of biochar + lime, biochar + lime +DAP and biochar + lime +compost significantly increased grain yield by 204%, 201% and 217% respectively. The study shows that the effect of biochar, lime and compost on soil acidity and bean root rot varied in combination. Application of biochar with lime and biochar with lime and compost reduced soil acidity. Combining biochar, lime or compost with an inorganic fertilizer reduces bean root rot and increases grain yield in acidic soils. Therefore, biochar, lime and compost can be used as liming amendments in acidic soils and combined with an inorganic fertilizer to improve bean productivity.

Invitation to EfD Kenya Seminar - Water Use in the Kenyan Commercial Sector: Coping with Strategies to deal with Unreliability
END_OF_DOCUMENT_TOKEN_TO_BE_REPLACED